Maharashtra: SSKM calls for statewide protest against inflation, unemployment among other issues from May 25 to 31 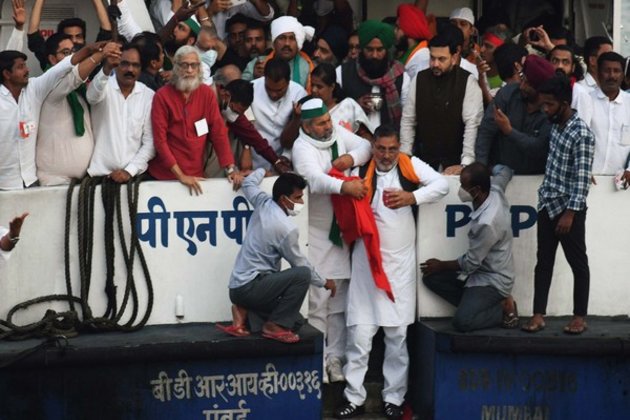 Mumbai (Maharashtra) [India], May 19 (ANI): Maharashtra farmers union, Samyukta Shetkari Kamgar Morcha (SSKM) called for a statewide protest from May 25 to 31 against rising inflation, unemployment and other people's burning issues.

A meeting of SSKM that took place on Wednesday at the Peasants and Workers Party (PWP) office in Mumbai gave a clarion call for large statewide protest actions at all district and tehsil centres in both urban and rural parts of Maharashtra against the thoroughly anti-people and pro-corporate policies of the Modi-led BJP government.

It is recalled that the SSKM was formed in Maharashtra one and a half years ago to support the nationwide farmer's struggle, and two huge statewide Mahapanchayats were held in Mumbai, along with many other actions.

SSKM, in an official statement, said that unprecedented price rise and unemployment have made the life of the people miserable.

"The prices of petrol, diesel, cooking gas and all other essential commodities have hit the roof. The biggest culprit is the Modi regime which has slapped massive surcharges or cess on petroleum products. Lakhs of youth have no jobs. In the World Hunger Index, India stands at 101 positions among 116 countries," the statement read.

Citing an example of data on COVID-19 deaths, the farmers union said that the World Health Organisation (WHO) under the United Nations has estimated that 47 lakh people in India have died in the last two years due to the COVID-19 pandemic which is the highest number of coronavirus-related deaths in the world, but the central government's official figure for Covid deaths is only 5 lakh.

"The Modi regime has refused to repeal the four labour codes which impose slavery on the working class. The historic one-year-long farmer's struggle forced the BJP regime to repeal the three Farm Laws. But it is not ready to give a legal guarantee to MSP at one and a half times the comprehensive cost of production," it said.

In Maharashtra, the issue of excess sugarcane and crop insurance have become grim. By slashing the outlay on MGNREGA, the BJP regime is leaving agricultural workers in the lurch, it added.

The SSKM meeting also came down heavily on the authoritarianism and communalism of the BJP-RSS government. It was decided to strongly resist the Centre's policy of using agencies like the ED, CBI and IT, and draconian laws like Sedition, UAPA and NSA against political opponents, not filing charge sheets against the Bhima Koregaon detenues for over three years, and hatching all conspiracies to intensify communal polarisation to divert attention away from people's real problems.