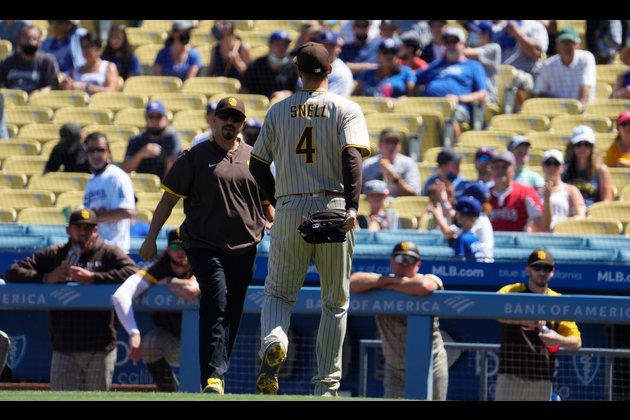 Snell, 28, threw a pitch in the dirt to the Dodgers' Trea Turner, pointed to the Padres' dugout and immediately limped off the field without waiting for a trainer to arrive. The injury occurred on his 11th pitch of the game.

The Padres also recalled right-hander Shaun Anderson from Triple-A El Paso and signed right-hander Vince Velasquez to a minor league deal, reportedly with the intention of promoting him for a weekend start against the St. Louis Cardinals.

Snell had been on a roll of late with a 1.85 ERA over his previous seven starts as the Padres are battling the Cincinnati Reds and St. Louis Cardinals for the second wild-card spot in the National League. The Padres (75-70) are currently a game behind the Cardinals (76-69) and a half-game ahead of the Reds (75-71).

The 2018 Cy Young Award winner in the American League, Snell has delivered a 7-6 record with a 4.20 ERA in his first season in San Diego following an offseason trade with the Tampa Bay Rays. He has been particularly sharp against the Dodgers this season, delivering a 1.90 ERA in five starts against the team's National League West rival.

Anderson, 26, has made four appearances for the Padres this season, striking out four over 3 2/3 scoreless innings.