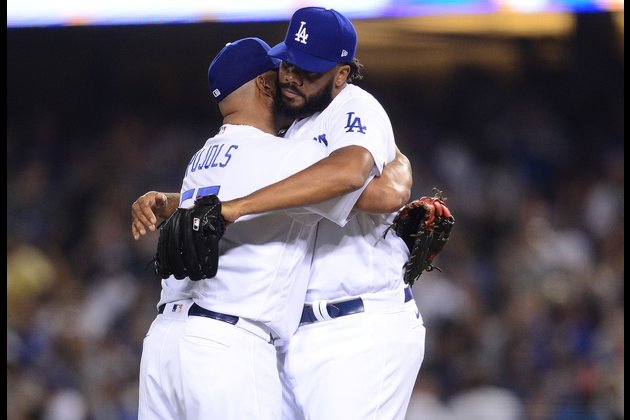 The shorthanded Los Angeles Dodgers are set to play one more game before reinforcements arrive, taking on the visiting Colorado Rockies on Sunday afternoon in the finale of a three-game series.

The Dodgers have been missing a pair of All-Stars this weekend. Right fielder Mookie Betts is dealingwith a hip injury, and first baseman Max Muncy is at home in Phoenix on paternity leave for the birth of his first child.

Betts has not started in any of the past seven games, while center fielder Cody Bellinger did not start Saturday after he tweaked his left hamstring in the series opener Friday.

Add in the absence of shortstop Corey Seager since May and the recent struggles of closer Kenley Jansen and others in the bullpen, and it's easy to see why the Dodgers are 2-5 in their past seven games.

After squandering three consecutive save opportunities over the past week, Jansen recorded a scoreless ninth inning Saturday to finish a 1-0 victory over the Rockies. Austin Barnes homered in the second inning for the game's lone run.

"Breathe in, breathe out and let it go," Jansen said on the Spectrum SportsNet broadcast about finding his form again. "It's a long season. Nobody wants to have (struggles) like that, but at the same time you have to keep your head straight. The thing that will get me over the hump this year is not physical -- it's how strong I can be mentally."

Betts and Muncy are due back Tuesday for the start of a three-game series at San Francisco, but first there is Sunday's game to get through.

The Dodgers will give right-hander Josiah Gray (0-0, 9.00 ERA) his first career start. Gray made his major-league debut Tuesday and gave up three homers and four runs in four innings of relief against the Giants.

Gray was 14-5 with a 2.41 ERA in 42 minor-league games, establishing himself as one of the top pitching prospects in the organization.

The Rockies will have their own Gray on the mound as right-hander Jon Gray (6-6, 3.68) is scheduled to start. His last start came against the Dodgers last Sunday when he gave up two runs on six hits over seven innings.

The Rockies were unable to get a hit against four Dodgers relievers over the final 3 2/3 innings on Saturday.

The Rockies had their heart of the order up against Jansen, but Charlie Blackmon popped out, Trevor Story flied out, Ryan McMahon walked and C.J. Cron struck out on three pitches to end the game.

"We're not where we want to be in the standings, but we come to play every night," Rockies closer Daniel Bard said. "If I'm the Dodgers, the Padres, the Giants right now, I wouldn't want to play us because you just never know what you're going to get."

In 2017, as Julian Assange began his fifth year holed up in Ecuador's embassy in London, the CIA plotted to ...

BARCELONA, Spain: The office of Catalan separatist leader and former regional head Carles Puigdemont said he was arrested by Italian ...

HADLEY, New York: On Monday, Corporal Walter Smead was buried at the Gerald B. H. Solomon Saratoga National Cemetery near ...

BUDAPEST, Hungary: In a boon to Prime Minister Viktor Orban's campaign for an early 2022 election, the Moody's ratings agency ...

WASHINGTON D.C.: A report from the Federal Reserve reports U.S. household wealth rose to a record $141.7 trillion by the ...

SYDNEY, NSW, Australia - Continuing uncertainty about the financial health of China Evergrande, and concerns over power generation in the ...

PUCUSANA, Peru: Fishing boats, which leave this port daily to harvest tuna, and later squid, face an uncertain future due ...

CHICAGO, Illinois: Less than a week before its staff vaccination deadline, United Airlines announced that more than 97 percent of ...

Technology stocks drift down during indecisive day on Wall Street