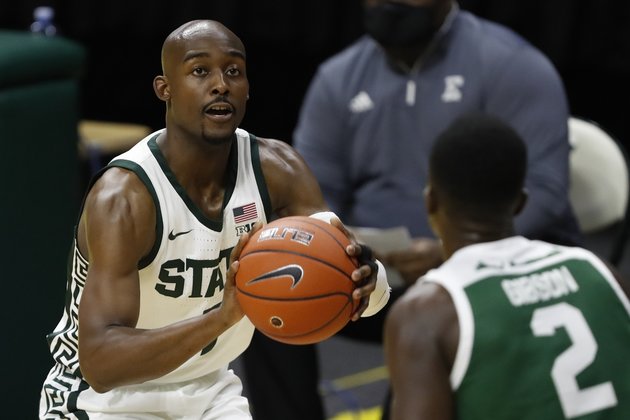 Junior guard Foster Loyer fired in a career-best 20 points and No. 13 Michigan State rolled to an 83-67 win over short-handed Eastern Michigan in the season opener for both teams at East Lansing, Mich. Wednesday.

Joey Hauser, who sat out last season after transferring from Marquette, supplied 15 points and nine rebounds in his Spartan debut.

Gabe Brown tossed in 12 points and Joshua Langford, who had not played since December 2018 due to foot injuries, added 10 for Michigan State.

Tom Izzo was on the sidelines at the start of his 26th season as Spartans head coach. He was cleared to return to the team on Monday after a bout with COVID-19.

Eastern Michigan had only eight players available due to injuries and contact tracing related to the virus. Yeikson Montero led the Eagles with 16 points and Ty Groce had 14.

Loyer set his new career high by halftime with 17 points as Michigan State established a 43-27 lead.

The Eagles reeled off nine answered points midway through the half to take a 19-17 lead. The Spartans made three turnovers during that stretch and Miles Gibson finished off the spurt with a 3-pointer.

From that point, Michigan State settled down and took command with Loyer leading the way. The Spartans scored the next 13 points, a run that began with a Malik Hall putback. Loyer knocked down a 3 to put his team on top, then fed Brown for a transition 3-pointer. Loyer capped the outburst with another long ball.

His next 3-pointer after an Eastern Michigan turnover gave his club a 15-point lead with three minutes left in the half. He scored his last points of the half on two free throws before Brown hit another 3 with eight seconds left.

Loyer reached the 20-point mark with his sixth 3-pointer of the contest off another Eagles giveaway early in the second half. He connected on 6-of-10 from 3-point range overall.

Eastern Michigan was down by 14 or more points throughout the second half.