What is Full Stack Java Developer? 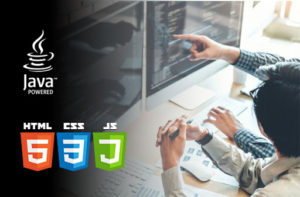 If you were asked to name the most popular and widely-used programming language for the last two decades, then you would obviously say Java. It has been the dominant language for years in the world of web development. Though today many languages have evolved and offer more powerful features like R, Python, Rust, and Scala, Java is still one of the most-relevant languages in the IT world. Java developers are still in high demand and those who keep updating themselves find even better opportunities in the market.

Now, a full-stack java developer is a professional who has gained expertise in using full-stack tools and frameworks that use the Java programming language in the development of a web-based application. The Java suite of technologies that are designed for web development are servlets, Core java, REST APIs, Javascript, and more. Professionals who take Java full stack developer training have extensive knowledge of building an end-to-end application and gain a competitive edge among their peers.

Let us know what are the tools and frameworks you need to know if you are embarking on a career in java full-stack development.

A lot of technologies, tools, and frameworks have evolved in the market, and no particular set of skills will make you an ideal full-stack java developer. However, you can gain some of the following skills to get started with this job role.

Starting with front-end (client-side) development, you should be well-versed with HTML, CSS, and Javascript. It is important to make an attractive user interface (look and feel) of the website which is done through HTML and CSS, and Javascript is used to make web pages dynamic and responsive. Learning any of the Javascript forms is beneficial like Angular or ReactJS.

Coming to the server-side of development, you need to master programming languages like Java or Python for coding and back-end frameworks like NodeJS. The back-end side is all about how the website works and communication between the databases and browser. Using these programming languages, developers need to maintain the functionality of the website and make updates when required.

Well, you may say it's obvious to know Java programming for becoming a full-stack java developer. The catch here is Java is being updated regularly and you need to know the latest features in order to develop cutting-edge applications. Experienced developers usually don't know the versions after Java 8. The latest version is Java 15 and more updates will follow every six months. So, you need to keep yourself updated.

Complementing the Agile mindset is the DevOps practice which focuses on continuous integration and continuous deployment. There are many DevOps tools in the market which help in automating various phases of software development. To become a full-stack java developer, you can get started with some popular DevOps tools like Docker, Jenkins, Kubernetes, Selenium, and Ansible.

Today's software and other web applications rely on data heavily as digitalization has dominated the entire IT industry. As such, knowledge of how to store data or overall database management is necessary. You should know how to write SQL queries to manipulate data. Learning MySQL, MongoDB, or Oracle database is preferred by developers.

REST or Representational State Transfer is an interface that uses HTTP for collecting data and generating options. It is a standard API used to fetch data and perform any desired operation on the data in any format. In other words, it allows the client-side to understand the server-side. You'll end up knowing it when you start your full-stack development journey.

Full-stack developers are one of the most sought-after professionals today. As per a Hindustan Times article, the demand for these professionals increased by 20% in 2018 compared to the previous year, with a specific increase witnessed in product-based companies, both in startups and large-scale organizations. The full-stack developer role also made it to the top five spots on the list of LinkedIn's Top 15 Emerging Jobs for 2020 in the US. Moreover, the hiring growth for this profession has been 35% every year since 2015. The top industries that are hiring full-stack developers include Information Technology and Services, Computer Software, Higher Education, and Financial Services.

Thousands of Hong Kong residents told to stay in homes

PanARMENIAN.Net - Hong Kong's government declared its first lockdown on Saturday, ordering thousands of people to stay in their homes ...

India's farmers are right to protest against agricultural reforms

The massive campaign organized by India's farmers against laws to deregulate the agricultural sector has entered its ninth week. The ...

Pandemic-induced job losses at KLM likely to rise to 6,000