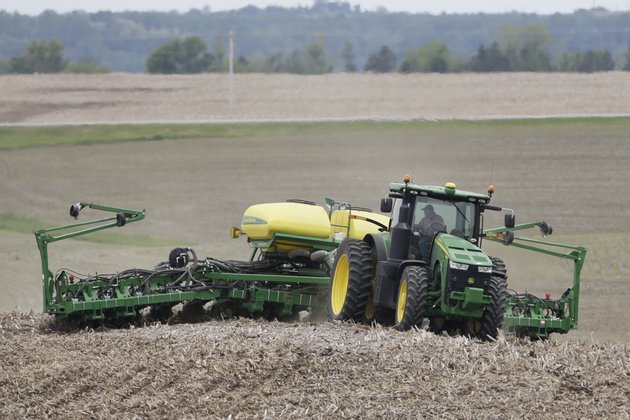 CHICAGO, ILLINOIS - Since the Trump administration began reshaping trade policy in early 2018, U.S. farmers have endured fluctuating prices and uncertain destinations for what they grow and harvest amid increasing tariffs on grain exports.

But as diplomats and lawmakers work to turn trade negotiations into long-term agreements, Steve Turner is among many farmers across the country receiving payments from the U.S. government to compensate for income lost due to trade battles. The Department of Agriculture's Market Facilitation Program is distributing about $14.5 billion overall to farmers in 2019 on top of an estimated $12 billion in 2018.

The MFP is intended to offset the immediate impact of tariffs on U.S. crop exports, helping farmers get through the resulting economic hardship while the Trump administration negotiates with key trading partners.

"It made a big difference to our bottom line, absolutely, there's no question about it," Megan Dwyer told VOA while gazing out on her soybeans fields situated near Colona, Illinois.

"If we're going to have tariffs, we ask that we be taken care of," says farmer Jeff Kirwan, who tends land in Mercer County, Illinois.

The USDA reports that Illinois, where Dwyer and Kirwan both farm - is the state receiving the most MFP funds in the country. Iowa, Kansas, Nebraska, and Minnesota round out the list of top aid-receiving states.

But many farmers say they prefer trade agreements over the MFP payments.

"No one is looking for a handout," says Dwyer.

Kirwan agrees, and says he supports what President Trump is trying to do in the hopes it makes the U.S. more competitive internationally on trade.

"I think it's important when you talk about trade agreements that we want good, fair trade," which is also why Kirwan and Dwyer say they are relieved the USMCA is moving forward.

The USMCA replaces the 1994 North American Free Trade Agreement, or NAFTA. A key part of the new agreement is to lower or end tariffs and boost markets for U.S. crops - most notably corn and soybeans - in countries bordering the United States.

"One success leads to hopefully more successes," Kirwan said to VOA on the sidelines of the Illinois Farm Bureau meeting. Kirwan and Dwyer both see passage of the USMCA as a sign of things to come as the Trump administration continues to press for a comprehensive trade agreement with China.

"It's just building some confidence with our other foreign markets," says Dwyer, "To show that the U.S. can come up with an agreement."

On Friday, the White House announced progress in trade negotiations with China, agreeing to delay tariffs on Chinese-produced electronics and toys while reducing existing tariffs on other goods. In return, China is promising to buy more American agricultural output.

"America's farmers and ranchers are eager to get back to business globally," American Farm Bureau Federation President Zippy Duvall said in a statement Monday. "China went from the second-largest market for U.S. agricultural products to the fifth-largest since the trade war began. Reopening the door to trade with China and others is key to helping farmers and ranchers get back on their feet. Farmers would much rather farm for the marketplace and not have to rely on government trade aid."

Similarly, the Illinois Farm Bureau called Friday's announcement "welcome news," adding that farmers in the state have "a profound desire to recapture lost export demand due to the prolonged trade war with China." The group expressed hope for "more good news yet to come."

Illinois farmer Evan Hultine says he is "very excited" about the prospects of the purchase commitment China is making in the current phase of negotiations, but that the "residual stress" of the trade war has him taking a wait-and-see approach. "I don't think my nerves or trepidation will completely fade until China starts making physical purchases and commodities and money changes hands," he told VOA.

Trade announcements take time to be implemented and even longer to benefit farmers economically. For all the trade headlines emerging in Washington, Turner says many farmers across America continue to struggle.

"The economic damage to us on prices has still been done out here," he said.

"Let's say that we have a [final] trade agreement [with China], and things really get moving - we know that the farm income situation has been affected and can't be turned around overnight," said Deputy Secretary of Agriculture Stephen Censky during a visit to the Illinois Farm Bureau's annual meeting.

Censky said he hopes further MFP payments in 2020 won't be needed if negotiators can reach a full and comprehensive trade agreement with China, which is one of the largest buyers of U.S. soybeans.

"All of us want to have trade and not aid," says Censky. "None of us wants to have this level of government payments going to farmers. We want the markets."

Farmers echo the sentiment but also want to know the U.S. government will continue to support them if further trade progress doesn't materialize and their list of worries continues to extend beyond omnipresent factors, like the weather.

WASHINGTON, DC - The U.S. military is rapidly ramping up its efforts to support the federal, and state governments in ...

UNITED NATIONS - How should the U.N. General Assembly and its 193 member states respond to the coronavirus pandemic? Members ...

European leaders are struggling to agree on how to handle the coronavirus pandemic. Their most recent disagreements are undermining European ...

U.S. accepts help from Russia in fight against coronavirus

Moscow has the biological strains that Washington needs to create a vaccine against its 2020's uninvited guest.U.S. President Donald Trump ...

WASHINGTON, DC - As the cases of coronavirus worldwide approaches 800,000, deaths in the United States have now passed 3,700.The ...

DUBLIN, Ireland - The European Commission on Tuesday approved a €200 million support package for Irish companies impacted by the ...

SYDNEY, Australia - Encouraging economic data out of China provided a boost to Chinese share markets on Tuesday, b ut ...