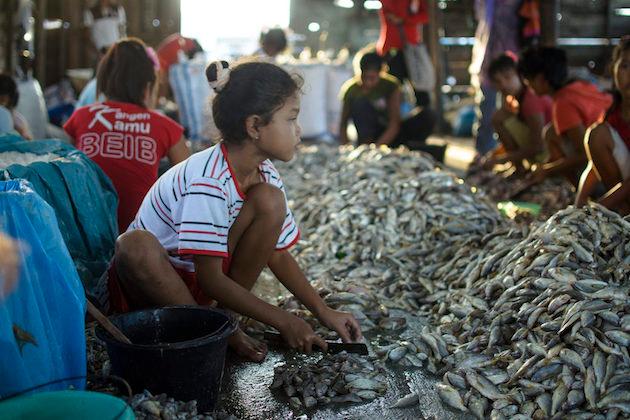 GENEVA, Switzerland - Incidents of modern-day slavery are only likely to increase as a result of some of the biggest challenges facing the world today, a UN expert outlined in a report for the Human Rights Council in Geneva on Monday.

The Special Rapporteur on contemporary forms of slavery, Urmila Bhoola, says over 40 million people are currently enslaved around the world, a quarter of them children.

Due to problems of environmental degradation, migration and shifting demographics, the scourge of modern-day slavery is expected to grow.

Over 60 percent of those in forced labour work in the private sector, Ms. Bhoola said, with women and girls disproportionately affected. Of the female victims involved in forced labour, an astonishing 98 percent have experienced sexual violence.

This sort of trend, "must serve as a wakeup call," Ms. Bhoola said, highlighting that the astounding statistics come four years after countries set goals aimed at stamping out trafficking, ending violence against women, and eradicating modern slavery.

"In wake of climate change, people may lose their livelihoods, young people who don't have access to decent work may migrate through unsafe channels and changes in the world of work, such as automation, may push already vulnerable people out of their jobs," all of which could increase people's vulnerability to slavery, the expert explained.

Even for those who escape, life for survivors is often difficult. Investigations by Human Rights Watch, highlight how even victims who manage to extricate themselves, can return home to the same desperate circumstances that made them vulnerable to begin with, but now facing stigma or blame.

"We cannot afford to stand by while more and people are driven into forced labour, servile marriage or child labour," she said.

Looking forward, the UN expert highlighted that for youth approaching working age, the situation is more dire - "By 2030, some 85 percent of the more than 25 million young people entering the labour force globally will be in developing and emerging countries," she noted. "Their perspectives to access jobs offering decent work will determine their level of vulnerability to exploitation, including slavery."

To prepare for this, "it is imperative" anti-slavery efforts are "systematic, scientific, strategic, sustainable, survivor-informed, and smart" she maintained.

Current efforts to end slavery are falling short and States and businesses "must take more decisive action to end slavery," Ms. Bhoola concluded. This must be done "by committing more resources to this effort and by adopting and implementing public policies which address contemporary forms of slavery effectively."

NEW YORK, New York Hundreds of guns were turned over in Syracuse on Saturday by owners responding to a buyback.New ...

LONDON, England: Britain has banned entry to the son of Equatorial Guinea's long-serving president for using millions of dollars in ...

CIA looks to Russia as probable cause of 'Havana Syndrome' attacks

WASHINGTON, D.C.: About 100 CIA officers and family members serving abroad have complained of ailments that include migraines and dizziness ...

All NYC public health workers to be vaccinated or tested weekly

NEW YORK CITY, New York: Due to the upswing in the spread of the Covid Delta variant, New York City ...

Plea for jailed protesters and journalists in Myanmar to be freed

IFEX is calling for the restoration of media licenses to IFEX member Mizzima News and other media outlets who have ...

NEW YORK CITY, New York: The home and real estate sector, which outperformed the broader market during the pandemic, even ...

WASHINGTON D.C.: The United States federal government is set to purchase an additional 200 million doses of the Pfizer coronavirus ...

MOSCOW, Russia: Rail traffic has been halted on the famed Trans-Siberian railroad after a bridge collapsed Friday east of Lake ...

WASHINGTON, D.C.: According to an agreement between the United States and Germany, aimed at reducing the "strategic dangers" of the ...

LOS ANGELES, California: The gun that killed outlaw Billy The Kid in 1881 is expected to be sold for $2 ...

Indiana Jones and the Kingdom of the Crystal Skull (4K UHD)