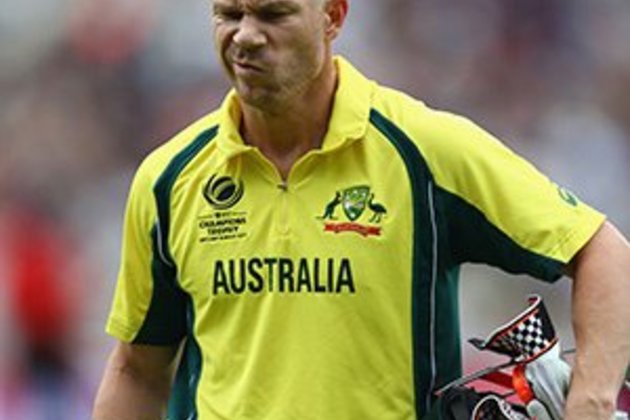 Sydney - Australian coach Justin Langer on Tuesday welcomed the top-order selection dilemma posed by the return of David Warner as offering "fantastic flexibility" to the team ahead of the World Cup.

The return of Steve Smith and Warner from their year-long bans for ball-tampering has left selectors in a quandary, with openers Aaron Finch and Usman Khawaja building a formidable partnership in recent one-day internationals.

Warner has been in blistering touch in the Indian Premier League and typically opens the batting.

But Langer on Tuesday said it was a welcome problem to have all three potential openers firing.

"We have amazing flexibility now," he told Melbourne radio SEN.

Langer said he would "mix and match" the top order in matches leading up to the World Cup.

"I love the flexibility of it. (It's about) boys playing their roles for the team not just playing the roles that suit them," he said.

Australia named their World Cup squad on Monday with middle order batsman Peter Handscomb "brutally unlucky" to have to make way for Smith.

"Steve Smith we felt would probably be able to play that role that Pete has done so well for us," Langer said.

The decision to drop Handscomb also means the team only has one wicketkeeper in Alex Carey.

But Langer said Tim Paine, Matthew Wade and Handscomb, all named in one of Australia's two A squads which will play in England later this year, were on standby if Carey was injured.

"Usually wicketkeepers, they give up their spot for no-one. They have to do a pretty serious injury to move aside for someone else," he said.

"And Alex Carey he is elite-fit and is as tough as they come. But if something does happen then we will have someone there to replace them."

There is no need to wonder why George Floyd (age 46) was murdered in broad daylight in Minneapolis, Minnesota, on ...

With the U.S. deciding to walk out of the Open Skies agreement, the U.S. is signaling to the world that ...

Bans for over 60s and children during pandemic under scrutiny

A small number of countries around the world have used age as a barrier in setting guidance for their response ...

Officials say that seven civilians have been killed and six others wounded in a roadside bomb attack in northern Afghanistan.The ...

NEW YORK, New York - Wall Street roared on Wednesday with all the major indices making solid ground.Optimism about the ...

PARIS, France, June 3 (Xinhua) -- France will maintain its planned tax on digital services at the Organization for Economic ...

SYDNEY, Australia - Stocks in Asia made strident gains on Wednesday, although on the Chinese mainland the advance was limited.The ...

MUMBAI, India - Saregama India on Wednesday announced a global deal with Facebook to license its music for video and ...

Chinese solid waste imports down by nearly 50% this year

BEIJING, June 2 (Xinhua) -- China is now moving closer and vows to achieve its goal of halting all imports ...